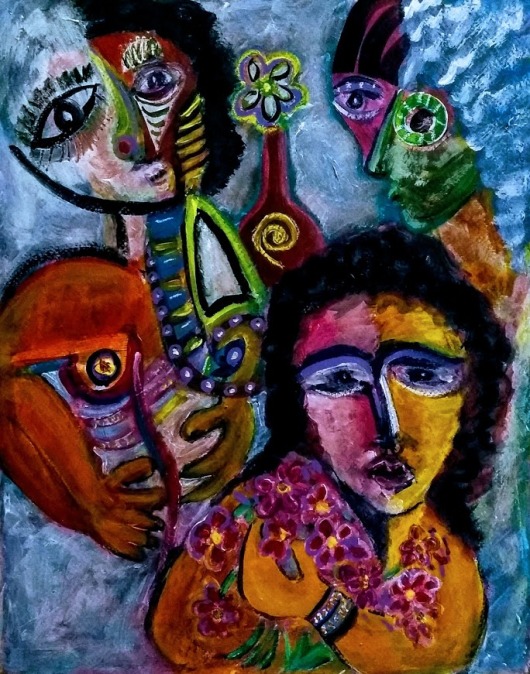 Painting and Haiku by Clinock

my love is busy

She is the dance of all the world’s oceans

She is the depth of mystery and the vibrating soul

She is the peeling back of all that is hidden

the music may be too loud,

there may be too many smiling teeth,

you may feel an uncontrollable madness in the night.

but do not fear the spinning lights,

the painted faces, the dizzying rides,

the smells and smoke and mirrors.

to break open the darkness,

“Making art isn’t an aesthetic operation; it’s a form of magic designed as a mediator between this strange, hostile world and us; a way of seizing the power by giving form to our terrors as well as our desires.” 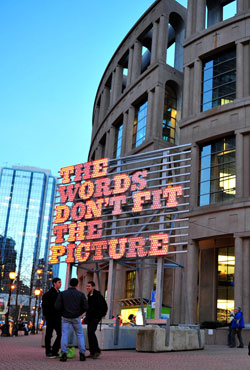 Ron Terada (born 1969) is a Vancouver born and based conceptual artist  working in various media, including painting, photography, video, sound, books, and graphic design. He uses signage and advertising as art forms and is best known for his monochromatic and neon signs onto which he transposes text.

(All credits due at bottom of page. Click on images for larger version).

On the left is a text-based artwork by Terada from 2010 that references Vancouver’s legendary neon past. It is installed outside of Vancouver’s iconic public library and this location emphasizes the art work’s message. Terada writes of this work: “The sign takes its cues from an era of signage when signs were seen as celebratory, grand and iconic – in effect, as landmarks in their own right, a kind of symbolic architecture… Taken within the context of a public library, the work touches upon – in a very poetic way – the use of words and language as boundless and imaginative, as a catalyst for a multiplicity of meanings.”  The tension between ‘words’ and ‘pictures’ is both real and not real – an idea explored by Magritte in his painting: The Treachery of Images (Ceci n’est pas une pipe); and this Terada work is testament to the way we read pictures and the way we see words.

On the left is Terada’s Five Coloured Words in Neon (2003). Here Terada explores the poetic potential of the everyday, north American vernacular. It is deadpan, intelligent, emotional and strangely humorous.

Left is Ron Terada’s Stay Away from Lonely Places, 2005. (Installation view, Ikon gallery, Birmingham, England, White neon, brushed aluminum, Plexiglass, wood, paint). For this exhibition, Terada created a neon sign reading “Stay Away from Lonely Places”, from the Willie Nelson song title. Inside the gallery, a series of photographs document a variety of local signs he encountered. With their visual idiosyncracies or odd turn of phrases, the signs viewed in isolation are terse and cryptic

Ron Terada’s photography, light-boxes, video projects and neon works draw on content from everyday sources. Through his juxtaposition of text and images, he references popular culture and art history traditions, often taking texts from such items as outdoor signage to create other layers of meaning. His work has been exhibited in solo and group shows in Canada, the United States and Europe. 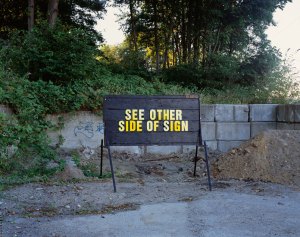 See Other Side of Sign, by Ron Terada. 2006. Courtesy of the artist and Catriona Jeffries Gallery, Vancouver.

This (left) Terada piece, Temporary, riffs on the Vancouver Park Board’s tendency of adding text to their public plantings.

Ron Terada’s practice calls attention to existing cultural forms and their operation as signs. Past works have adapted gallery signage, posters, brochures, and exhibition soundtracks to question the statements of cultural institutions.

Terada is represented by the Catriona Jeffries Gallery based in Vancouver.

‘The 100′ series was initiated by my 100th Post in April 2012. As text and images are the essence of my blog my intention is to present 100 pieces of textual art from historical and contemporary artists and from my own hand. To view the series to date click on ‘The 100’ in my Category Menu.